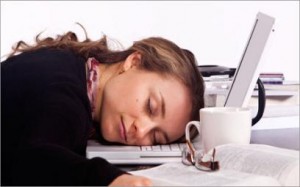 Chronic fatigue syndrome is an acquired disease affecting all body systems, especially  the neurological, endocrine and immune systems. This disease is very poorly understood by patients, health professionals and researchers (1). 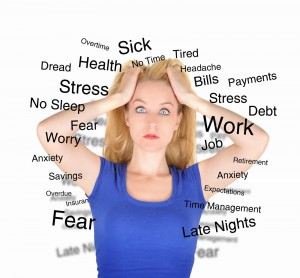 • Non-restorative sleep (sleep after which they do not feel rested).

• Muscle pain that moves around, sometimes without a clear reason; joint pain without redness or swelling.

• Tender lymph nodes: most often at sides of neck and under arm.

• Feeling dizzy or weak upon standing.

• Not tolerant to heat or cold.

Numerous studies have demonstrated that an imbalance of the intestinal ecosystem is responsible for chronic fatigue syndrome. 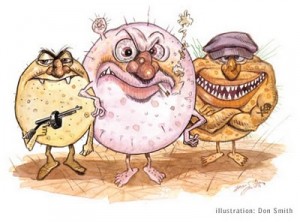 The predominance of “friendly” flora  of the gastrointestinal track prevents the production of inflammatory particles responsible for an increase of oxidative stress and inflammation.

To protect against uncontrolled inflammatory reactions, intestinal epithelium has developed mechanisms to limit bacterial growth by limiting direct contact with the bacteria and preventing bacterial dissemination in the underlying tissues. This intestinal barrier consisting of a single layer of epithelial cells is an important components of the innate immune system. It separates the inner part of the body from a “very dirty” outside environment. Thus, the function of the mucosal barrier is a key element in the arsenal of defense mechanisms needed to prevent infection and inflammation.The barrier function of the mucosa is provided by mucus secretion, chloride secretion and by water an other important point is that those cells are closely related to each other thanks to a system of tight junctions located at their apical pole. Those different mechanisms contribute to ensure the physical and functional integrity of the intestinal barrier. 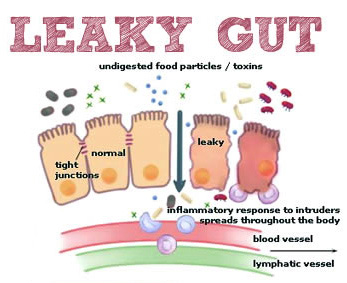 A malfunction of the mucosal barrier occurs in the chronic fatigue syndrome. Psychological stress also disrupts the intestinal barrier allowing the entry of antigens and microorganisms generating excessive response of the immune system lying under the intestinal mucosa.

Therefore, malfunction of the mucosal barrier causes impaired intestinal motility, intestinal secretion and abdominal pain consistent with one of the symptoms found in chronic fatigue syndrome : the irritable bowel syndrome.

A weakened tight junction barrier with subsequent gut-derived inflammation is a novel pathway in chronic fatigue syndrome patients with leaky gut. Those patients can be treated with specific leaky gut therapy and a appropriated diet (28).

Numerous publications have shown that chronic fatigue syndrome is associated with an excess of oxidaive stress.
Oxidative stress occurs when there is an imbalance between the production of free radicals (highly reactive molecules, related to the oxygen) and the antioxydant pool which neutalize those reactive componds. Free radicals directly damage our tissues. 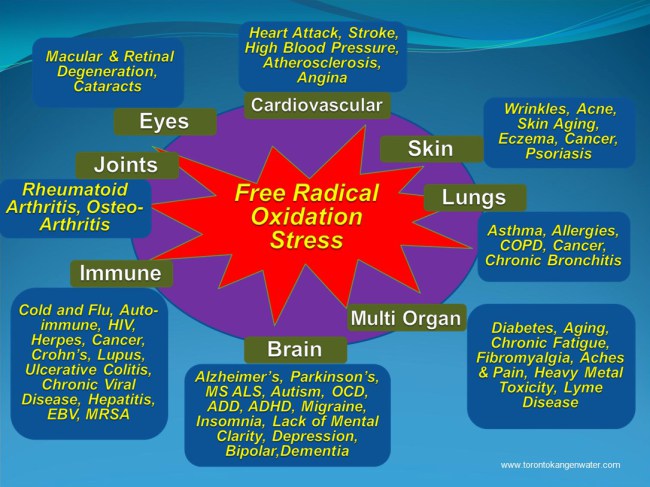 The changes in intestinal flora can have serious consequences for the health of the host. When overgrowing pathological bacteria in the oral cavity and the gastro-intestinal track enter in contact with heavy metal,they produce hydrogen sulfide, “a toxic gaz” with a typical smell of rotten eggs. 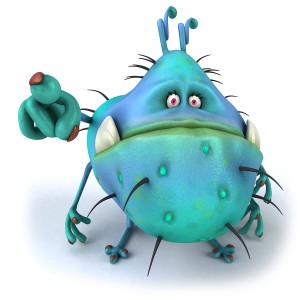 Hydrogen sulphide is a more potent inhibitor than cyanide of the mitochondrial respiratory chain reaction, blocking the production of energy (ATP) by the mitochondria, which explains this chronic fatigue.

This overproduction of H2S is also responsible for the destruction of the intestinal barrier maintaining the vicious cycle of inflammation.

Mitochondria are intracellular organelle that produces our universal energy ATP (adenosine triphosphate). when our mitochondria function properly we produce 50 kg of ATP per day. 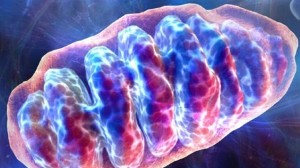 If the body is short of ATP, it can produce very few amont directly from glucose by converting it to lactic acid. This may happen in case of chronic fatigue syndrome. The mitochondrial respiration shift from an aerobic to an anaerobic energy production.

The accumulation of lactic acid in the blood, called lactic acidosis is associated with muscle pain, heaviness, pain and aches that damages muscle and nerve tissue. For those reasons patients suffering from chronic fatigue syndrome experience difficultes to improve their fitness.

A coenzyme Q 10 deficiency has been observed in many studies. Coenzyme Q 10 is a component of the mitochondrial respiratory chain playing a crucial role in the synthesis of ATP, the universal energy used by our body. In case of coenzyme Q 10 deficiency, not only less energy will be produced, increased oxidative stress takes place and is involved in the vicious cycle leading to this syndrome.

This lack of coenzyme Q10 may also explain the depression encountered in the chronic fatigue syndrome as well as increased morbidity from cardiovascular disease.

Patients suffering from chronic fatigue syndrome often have extremely low level of cortisol and low doses of hydrocortisone can improve the fatigue for those atients. (4, 5, 6, 7).

Melatonin regulates the rhythm of wakfulness and sleepness, a desynchronization may lead to clinical signs as sleep and mood disorders and fatigue.

In patients suffering from Parkinson’s and chronic fatigue syndrome, melatonin therapy decreases anxiety and improves sleep and quality of life (8).

In some patients with chronic fatigue syndrome, the nychtéméral cycle is disrupted, the secretion of melatonin occurs later and they don’t have a restorative sleep. For those patients, treatment with melatonin significantly improves fatigue (9). 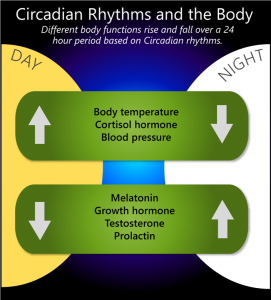 Its name means fast delivery in Greek. It plays an important role in childbirth but also during breastfeeding strengthening linkages between the mother and her child. Ocytocin boosts the relationship between two lovers and strengthens positive behavior, Ocytocin have many other properties, one of them is the reduction of stress recognized as potentially triggering factor in chronic fatigue syndrome. Oxytocin regulates our emotions and social behavior (10, 11, 12, 13, 14, 15).

Chronic fatigue syndrome is associated with alterations in the secretion of vasopressin (antidiuretic hormone) and disregulation in cardiovascular autonomous nervous system, suggesting a central dysregulation which one explains sympoms encountered in chronic fatigue syndrome : dizziness, weakness when standing, fatigue and a fuggy brain, confusion. (16, 17, 18, 19, 20). 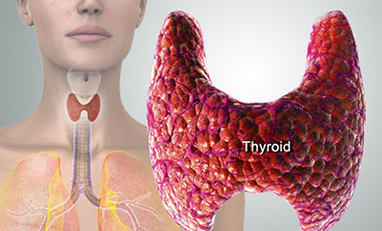 Thyroid hormones are essential for the proper functioning of our cells. When thyroid hormones reach the target cells, it stimulates cell activity which releases thermal energy contributing to the maintenance of our body temperature. Indeed, hypothyroidism may be accompanied by nervousness and fatigue. Clinical signs of hypothyroidism can be present while blood levels are within the standards of the laboratory. Just like menopause, it is important to focus on the clinical signs. If they are amended by thyroid hormones substitution this is an evidence of a subclinical hypothyroidism corrected by this therapy.

Sometimes, thyroxine (T4) the prohormone can’t be converted into tri-iodothyroxine (T3) the active form. This occurs particularly in cases of stress which one is well known as triggering factor of chronic fatigue syndrome.  T4 is converted into reverse T3 (rT3) inactive form (21).

If prescribing a mixture of T4 and T3 (Thyroid Erfa), some symptoms disappear such as lack of energy, nervousness, fatigue, this therapeutic test is conclusive and this substitution can be continued.

DHEA plays a role in regulating the immune system and the inflammatory response at the origin of chronic fatigue syndrome (24). DHEA may also improve 2 main complaints : fatigue and low energy

Peak secretion of growth hormone occurs between 23 and 3 hours. Thanks to growth hormone we may recover recover from physical and mental fatigue accumulated throughout the day.

Nocturnal secretion of growth hormone tends to be reduced in patients suffering from chronic fatigue syndrome (25, 26).

Although the quality of life, has not be improved significantly during GH treatment, some patients were able to resume to work after a long period of sickness (27). 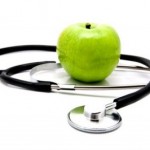 You will be asked to fill in a health questionnaire and an exhaustive nutritional and hormonal check-up will be prescrible in order to target the causes of this chronic fatigue syndrome and a customized treatment will be proposed to you. 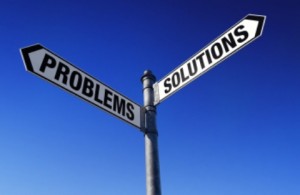 Thanks to restoring a “protective” gastrointestinal flora and the gut barrier function, inflammation will be under control and many symptoms such as gastrointestinal disorders, fatigue, insomnia, muscle pain … will disappear.

Energy production will be boosted by keeping under control the oxidative stress. Correcting hormonal imbalances is also part of the treatment.